Top Posts
11 Christmas Gift Ideas for a Traveler That...
Holiday in Cambodia
Eastern Mountain Sports Promotion for Fall 2018
Travel and The Law of Attraction
New Year Resolutions and The State of Becoming
BOGO Sale at MooseJaw!
Firebox Stove Review | For a Backpacker, By...
Travel Themed Graphic Tees
LifeStraw Review | For a Backpacker, By a...
6 Fun Gadgets for Backpacking and Travel
Home Uncategorized El Camino de Santiago 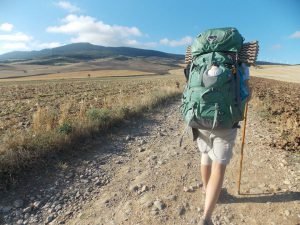 From East to West, traversing the whole length of Spain on foot in roughly 35 days, El Camino de Santiago is the pilgrimage of a lifetime.

It was a Tuesday afternoon in 2013 and I was mid-way through the film, The Way (starring Emilio Estavez and Charlie Sheen, check out my review here), when I first realized I wanted to embark on this adventure. The very next day I headed out to the nearest bookstore and picked up a Camino guidebook. Then I started saving.

Exactly twelve months, three flights and four bus rides later I was dropped off in St. Jean Pied De Port, France. I stopped by the Pilgrims Office to pick up my pilgrims passport, also known as a credential. I rummaged through an old basket full of scallops until I found the perfect one to hang on my pack.

The scallop is one of the most iconic symbols of the Camino, along with the marking arrows of course.

And the last thing for me to do before my adventure really began was to find a stone or rock to carry. Many pilgrims do this as a symbol of either their sins or burdens. It can be any size, and where you leave your stone is entirely up to you. However, historically it is primarily left at the cross of Cruce de Ferro. Now I’m not Catholic and wasn’t on the Camino for religious reasons, but carrying a stone with a symbolic purpose resonated with me.

I continued over the Pyrenees range trekking south towards the Spanish border and then west across the entire northern region of Spain. Reaching Santiago de Compostela and still further to the Sea of Finisterre.

They say anyone can do this pilgrimage, but I don’t concur and the movie didn’t do the Camino justice. Had I really known what I was getting myself into I would have done some serious prepping including consistent exercise and flexibility stretches. 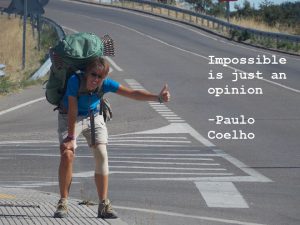 My mentality was, “It’s just walking” … yes, it is walking. However, it’s walking with 30 pounds on your back. It’s walking up to the top, over, and down the other side of multiple mountains with your swollen toes crammed into the front of your boots. It’s walking for 8 to 10 hours a day, which means footwear is super important. I wore a pair of LOWA lowrise boots that had fit me perfectly when I purchased them, and didn’t give me any problem at all on my weekend backpacking trips I took to “prepare” for the Camino. However, a week into my trek I found myself wishing I would have went a half size bigger. I didn’t take into consideration that my feet would swell after several hours and several days of walking. There’s that word again; walking.

Except let’s get serious, it’s not just walking. It’s pulled muscles in places you didn’t even know muscles existed. It’s sprains and blisters and laying in bed at night feeling like you’ve been run over by a dump truck. At least it was for me, someone who didn’t actually prepare. I hurt my left knee pretty bad on a decent just a few days into my walk, to the point I could hardly put any weight on it. Then over the course of the following days I proceeded to hurt my right ankle which was enduring twice as much weight as it usually would have been.

For me, if it wasn’t one thing it was another. Yet somehow the pro’s out-shined the con’s, the friendships made outnumbered the blisters had, and the memories stayed with me long after the aches and pains had subsided.

And I made it to Santiago. I walked every single kilometer, one foot in front of the other, literally dragging myself some days. 35 days, two walking sticks, and one knee brace later, I walked myself right into the center of Santiago. I had a 30 second dance party in front of the cathedral, and excitedly made my way to the final pilgrims office. I proudly received my Compostela and my certificate (all in Latin – I couldn’t read a word! And I didn’t care!) 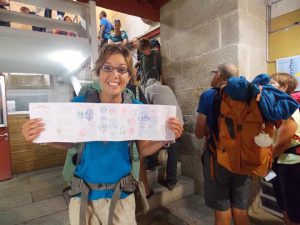 I don’t know where I would have been had I not brought a guidebook. With all the technology we have these days, and the several hundred marking arrows along the path, I almost didn’t.  But a guidebook is absolutely mandatory if you’re thru-hiking any of the Camino routes from beginning to end.

I’ve included a photo of John Brierley’s, “A Pilgrim’s Guide To The Camino de Santiago“ which was my saving grace on more than a few occasions. It conveniently breaks up the 800km trail into 33 separate day journeys, naming the village or city you’ll begin in, different cafe’s, water fountains (or lack thereof), and markets you’ll pass before arriving in the city or village you’ll be staying in for the night. It lists the names of Albergues (hostels for pilgrims only) in each stopping point, alternative routes, and is packed full of tips and other information that will for sure come in handy.

… Then I looked down and I saw it. It was black and misplaced against the green of the mountain grass. I picked it up and felt it’s coolness in my palm. This was the rock, dark and rough around the edges, that symbolized so much of my life – so many experiences I hadn’t wanted to have. I felt it in my pocket as the days passed. Working through so much garbage, I placed all of that negativity into it’s solid shape between my fingers. Day after day the sun beat down, my muscles cried out, the sweat caked with dirt on my skin. The process between my head and my heart filtering out the waste that had settled there years before. I focused on my breathing, in and out, my lungs swelling within me. My feet, one in front of the other. The crunching beneath my boots. Counting down the days till I would reach the sea. Days of stirring up and sifting through and letting go. It was the letting go that hurt, for I had held on for so long that the feeling left me sick and empty. The Sea of Finisterre was harsh the day I arrived. The waves were angry and crashed against the rocks. I stood below the ruins of an old castle there, letting the air chill me, feeling the salt on my lips as grey clouds tumbled with urgency above. I cast that stone with everything in me, out into the depths as far as I possibly could. And it sank with such purpose I could almost hear it bury itself once at the bottom. And I knew then that it was gone. And I was lighter. And changed. – Camino Journal 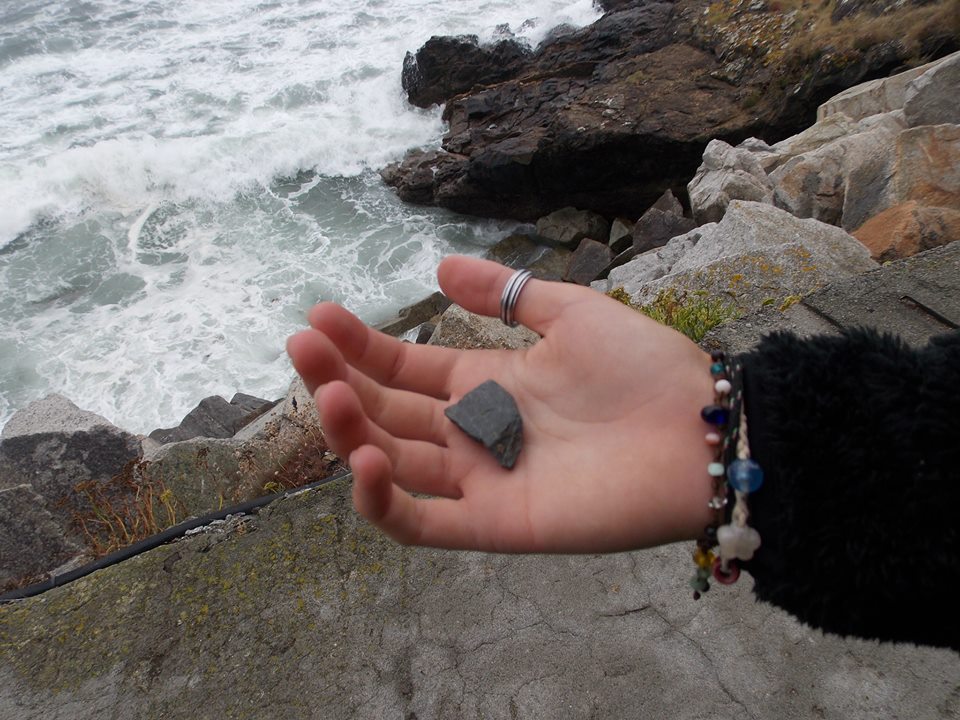 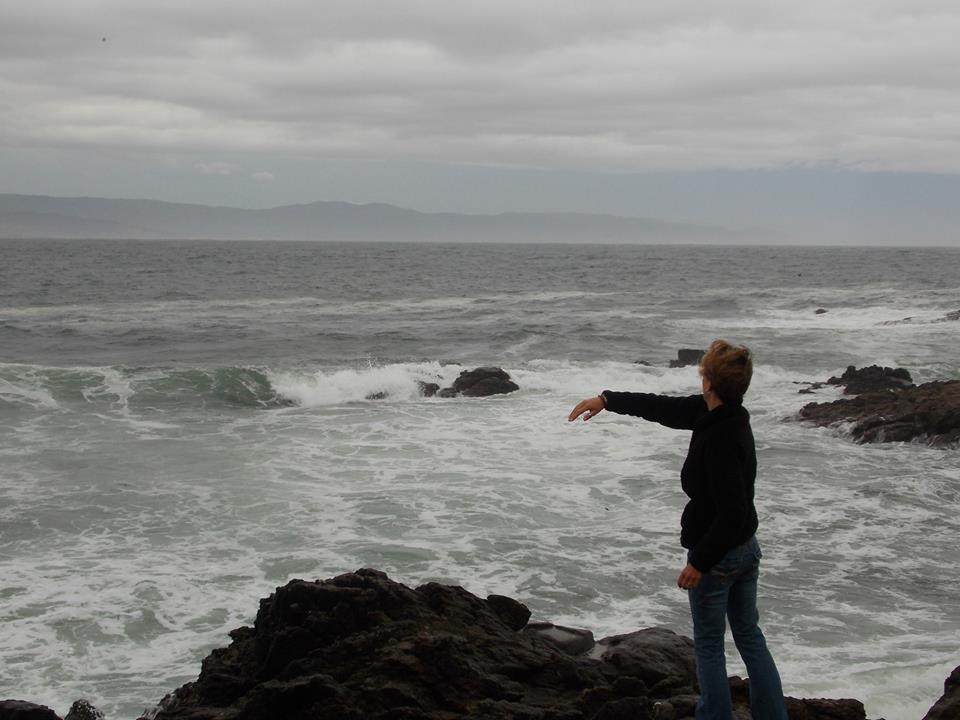 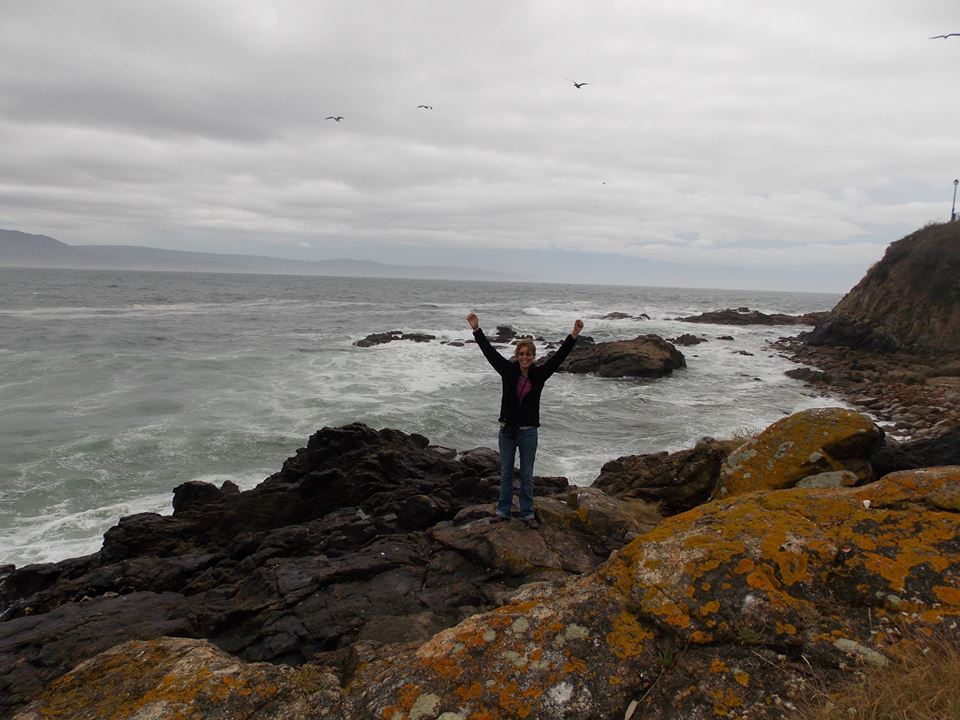 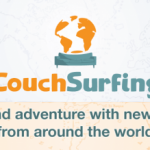 New Year Resolutions and The State of Becoming

Off the Beaten Path Travel Quotes

30 of My Favorite Backpacking and Travel Songs...

Thanks! Yes, it was a very meaningful trek. Happy you enjoyed reading!