Top Posts
11 Christmas Gift Ideas for a Traveler That...
Holiday in Cambodia
Eastern Mountain Sports Promotion for Fall 2018
Travel and The Law of Attraction
New Year Resolutions and The State of Becoming
BOGO Sale at MooseJaw!
Firebox Stove Review | For a Backpacker, By...
Travel Themed Graphic Tees
LifeStraw Review | For a Backpacker, By a...
6 Fun Gadgets for Backpacking and Travel
Home India Getting real with myself in Goa, India – Part Two

Getting real with myself in Goa, India – Part Two

I’m drinking rum and cokes with my girlfriend Hillary, and our new Couchsurfing friends, G and Kit. 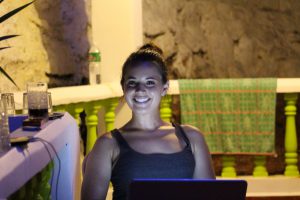 We’ve been staying with them in Goa for a few weeks now. During that time they’ve introduced us to some of their friends, and in the evenings we sit around smoking grass, listening to music, and swapping stories.

The patio is filled with sarcasm, laughter, and playful banter. 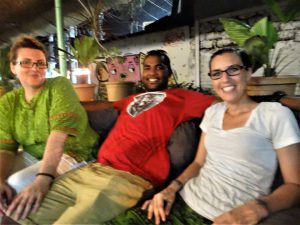 As darkness falls, G turns on the cheesy blue light bulbs the landlord put in as the outdoor lighting. Sometime later a Bollywood star shows up with his girlfriend, running his fingers through his thick hair every few minutes like an Indian version of Fabio. There are not enough chairs so I take a few from the neighbors place and hope they don’t notice till morning.

The bottle of rum becomes lighter, emptier, as the hours pass.

G plays music comparable to Walt Disney’s “Fantasia,” and Kit and I lift our imaginary mops and buckets, making up silly lyrics to the dramatic beat.

Soon the rum is empty and the chips are gone.

I want to go for a ride.

She may be a bit tipsy. I’m definitely a bit drunk. We’ve only just met a few weeks back, but Kit has impacted my life in a way I couldn’t yet fully understand. Having lived between India and Australia for years, she’s accustomed to the roads and I trust her. She drives with both speed and caution, always watching the road and the oncoming scooters as she steers ours. She watches all of the important things; the night animals, the headlights, and the speed breakers.

The moon is high and full above us. I reach for it and can almost feel its coolness at the end of my fingertips. I bring my arms down and spread them as far as they’ll go and tell her I wouldn’t mind being a bat.

“Why a bat?” she asks in her Australian accent.  I take a second and close my eyes. The darkness behind my eyelids matching the darkness we’re moving though. “I think they feel the world more than they see it, ya know? I guess it just seems a more intimate way to live a life” I reply, almost yelling over the noise of the engine. The wind roars past us, filling my ears and whipping my hair, but I think I hear her say, “I love your work!” as we lean into a curve and she hits the gas.

Later that night as I laid in bed, my head swam with a million hazy thoughts and with a rush of (alcohol-induced) clarity I realized I felt at home here. I didn’t miss anything, except maybe Taco Bell and a strong Wi-Fi connection. But despite these two things, I felt more content than I had in a long while.

I felt myself completely embracing the thin, hard mattress and the limp pillow that – folded in half – was doing its best to support my head. I was oddly at ease with the lack of traffic laws, the consistent smell of manure, and the absence of air conditioning. I became comfortably lax with the idea of “Indian Time,” knowing five minutes meant thirty, and an hour meant sometime this afternoon.

The edges of the box in which I was living were blurring, expanding yet again.

I felt the change somewhere beneath my skin. I felt it course through my veins, bringing life to parts of me that had been so deprived of oxygen, suffocated by 90 hour work weeks, debt, and grinding routine. Parts that I longed to feel again. I closed my eyes to stop the slow spin of the world around me and fell away into the warm darkness that cradled me as I entered a dreamless sleep. 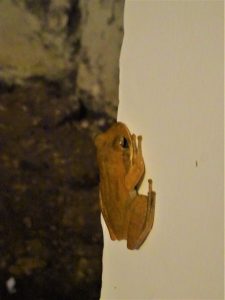 It’s early morning, just before 6 o’clock when I walk out onto the veranda. My feet baring tan lines from weeks of wearing flip flops, the tiled floor cool beneath them.

I can see the mist lifting through the trees and hear rousing roosters in the distance. All of the birds are chirping or singing or cackling, whichever their native tongue, as I brush my teeth at the outdoor sink. The white froth doesn’t swirl like it does at home, the water pressures aren’t the same here, so I watch it plop and drip in thick strands down into the drain.

Ants form a line on the plaster and concrete wall behind the place I set my toothbrush. A small frog jumps past me as I open the door to the bathroom and sticks himself in a low place as if curious to see what I’m up to.

The stall holds a toilet with no seat, a sprayer, a shower head and a few buckets for laundering purposes. I grab a bar of soap from the plastic shelf hanging on the door and step out and back towards the sink. Here my fingernails are always dirty, carrying around parts of the day before. I clean underneath them vigorously, lathering my hands for several minutes before rinsing and drying them with a towel hanging on the railing that lines the patio.

I sit in the quiet as everyone else lay sleeping. I hear the ceiling fans whirling around in their rooms and watch as the sun peeks up over the tree line, brightening the sky a shade or two every couple of minutes.

The world wakes up around me, and I relish in the last moments of stillness and calm.

Half the day later we’re having lunch at a beach resort in Agonda, about an hour’s walk from G’s place. I’ve been coming here regularly for the delicious falafel and fries they serve. I’m also a sucker for hot tea and milk, so I order that too. 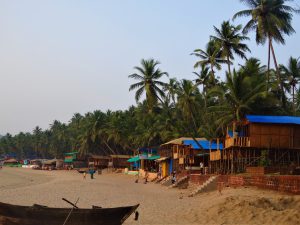 “It’s 37 degrees Celsius,” I overhear a waiter tell a tourist staying at the resort. I pass up the opportunity to do the conversion in my head and settle for knowing that it’s somewhere near 100 degrees Fahrenheit.

The days are long and hot but somehow not stifling. There’s a certain freedom found and felt, one I don’t have at home. The huts on the beach are full of foreign vacationers taking breaks from their lives in an intentional and deliberate sort of way.

The sort of way that declares, “I came from a specific place, I’m doing a specific thing, and I’m leaving at a specific time.”

The sort of way that smells of colognes and perfumes.

I haven’t smelled like anything but myself for weeks.

The roads are lined with shops where locals carry out their daily business. Everyone seems to have a place they fit neatly into, and I feel a bit as if I’m peering in on them.

Milk swirls around in my black tea and steam rises and fogs my glasses as I take the first sip. 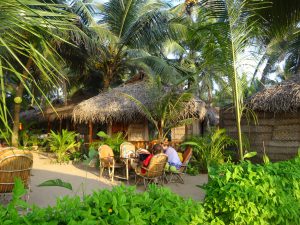 Somehow subtracting myself from the equation I had subscribed to back home has created this beautiful living piece of abstract art that I would forever remember. These splatterings of colorful moments, these bold pieces of time standing stark and in contrast to the blandness of routine I once blindly adhered to.

The colliding of two different worlds.

And the irony of it all was I had chosen to create them both.

And so I lounge in cafés, spend time walking the beach and sit around the veranda back at the house having “D&M’s” (deep and meaningfuls), as Kit likes to call them.

Taking it slow, as if I’m waiting for myself to catch up with me.

Embracing the organized chaos that is the well-oiled engine that keeps this country running, I marvel at being alien and yet somehow still connected to its energies. I listen to the beats and pulses of my body, the pace and rhythm of the world around me, and I wait.

I wait for the answers to come.

Missed Part One? Check it out here!

Getting real with myself in Goa, India – Part One 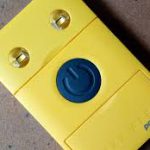 Getting real with myself in Goa, India –...

A day in the life of Beef!

So beautiful Courtney,
I want to travel every place I possibly can and this makes me want it to come that much quicker. You make it seem like you are learning so much about your self, by simply being around a different perspective on living. Please keep it coming! I can’t wait to read on.

Thanks, Betsey! Yes, it’s amazing what you learn about yourself while traveling. You meet a whole new side of yourself, for sure. I traveled for 6 months with my girlfriend, and WOWZA did we learn a lot about each other!! All good things (mostly!) 🙂

“Oh my goodness madam you surely captured a moment in time!” ( she says with a heavily clipped Indian overtone and a head wobble) I love it and i blushed same time. Very special time & cheers to more D&M’s taking place face 2 face somewhere on the globe xox

Such an engaging narrative I felt I was there with you. There is nothing quite as rewarding and enlightening as travel to exotic foreign lands, embracing the culture, food and simpler way of life. We can learn a lot from leaving our materialistic rat race lives – even if just for a vacation.

Indeed, Tonson – enlightening is a great word to use. And if you felt like you were there with me, then I’m doing my job! Thanks!

We can easily forget that freedom and fresh perspective we get from leaving our home environment to go out adventuring. It’s too easy to get caught up in the day to day busy-ness (business!) around the home. Thanks for sharing your adventure, very inspiring!

So true, Angela! Thanks for reading!

Travel, the brains elixir! It never ceased to amaze me how the mind could wonder and take one beyond where they were at moment, be it from a glass of wine, squeeze of a hand or sparkle of light from a far off place. It’s hard to find at our home base, travel expands the censes! Real travelers don’t have a single home. They are always thinking about the next adventure and the next new temporary home base. Travelers understand!

Somehow it’s as if we’re never wholly in just one place, isn’t it? I look forward to reading your thoughts/comments in the future!