Top Posts
11 Christmas Gift Ideas for a Traveler That...
Holiday in Cambodia
Eastern Mountain Sports Promotion for Fall 2018
Travel and The Law of Attraction
New Year Resolutions and The State of Becoming
BOGO Sale at MooseJaw!
Firebox Stove Review | For a Backpacker, By...
Travel Themed Graphic Tees
LifeStraw Review | For a Backpacker, By a...
6 Fun Gadgets for Backpacking and Travel
Home Nebraska Omaha, Nebraska 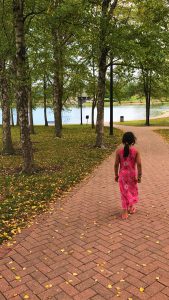 Have you ever asked yourself, “What exactly is in Omaha, Nebraska?”

Yeah, me neither. That is, until a few weeks ago.

I ended up taking our 8 year old niece, Mallory, out to Omaha, Nebraska for a week. Hillary’s company had assigned her to the Cornhusker state for the month of July, and we decided to roadtrip it out there to visit her.

Little Mallory and I made it a quest to find an answer to this question, and thus begins our Omaha Adventure!

Situated right on the Iowa/Nebraska state line you’ll find the city of Omaha. If you’d like to hone in on your bilocation skills, take a walk on the Bob Kerrey Pedestrian Bridge that stretches 3,000 feet over the Missouri River. It’s here that you can step over into Council Bluffs, Iowa while still keeping a firm stance in Omaha, Nebraska.

Nearby you’ll find Lewis and Clark Landing, a public park that runs along the riverfront. Lewis and Clark Landing is the original landing site of the 1804 Lewis and Clark Expedition and is home to the second largest Labor Memorial Monument in the United States. Made up of five towering steel figures representing those who built the city of Omaha, and with several surrounding plaques chocked full of interesting facts, this proved to be an interesting stop. In the summers concerts are held here, and quite a few festivals throughout the year. Park benches litter the riverfront, as well as umbrellas and picnic tables. A highlight of downtown. 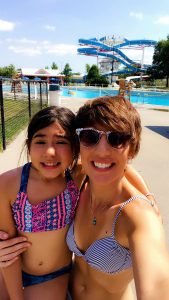 Being nearly 100 degrees in the middle of summer, my niece and I threw on our swimsuits and headed to one of Omaha’s most prevalent attractions, the FunPlex.  At the not-so-inexpensive price of 26 dollars for adults and 18 for kids (2yr and under are free), and not counting what we spent on food, drinks, and renting water tubes, we made it worth it and spent the entire day here. Built back in 1987, the FunPlex is not only the largest amusement park in Nebraska, but it’s the site of the only roller coaster in the whole state! This blew my mind. There’s a pretty large “MotionOcean” as well as a lazy river, two water slides, a water play area with the ever popular 1-ton bucket that dumps on it’s unsuspecting victims below, and an adult area (which I didn’t get to enjoy) complete with a swim up bar. On the “dry side” sat the only roller coaster in the state, bumper cars, go karts, and a few rides equivalent to those found at any county fair.

Then came the rain! What do you do with an 8 year old who’s bouncing off the hotel walls while it’s thundering outside? After doing some Googling, we headed to Family Fun Center XL! This place has everything from paintball and lasertag, to a climbing wall and arcade games. Not to mention the eat-as-much-as-you-want-for-as-long-as-you-want buffet is quite a nice option as well! Decently priced for an arcade with several different packages to choose from, you can’t really go wrong spending a few hours here. After cashing in our tickets, I decided on the only Megamind mask left up on the display wall. And boy, was it more of a hit than I thought it’d be! The rest of the time spent in Omaha was of my niece snapping photos of “Megamind driving” and “Megamind in the elevator” and even “Megamind on the toilet” – yep, that happened and was definitely her favorite shot! So of course Megamind came with us during the rest of our sightseeing adventures. 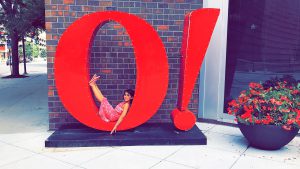 Once the rain cleared up, we enjoyed walking around the cobblestone streets of Old Market. This area of downtown consists of mainly pubs and bars, a few little stores, an old ice cream parlor and chocolate shop. We then sought out the Big O! An iconic symbol of downtown Omaha. There were several musicians playing on the street corners, many of them being of the jazz influence, and a few quaint fountains and parks along the way. 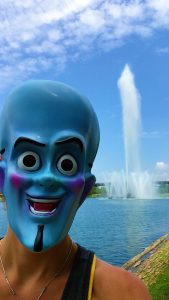 Then we headed down to Heartland of America Park with it’s 320 foot water jet and light show. With it being mid-day the light show wasn’t nearly as impressive as it is at night, but it was pretty awesome regardless.  Veteran memorials can be found on the grounds, lovely shade trees over park benches, and boat rides are also offered for 3 dollars if you’d like to see views of downtown from on the river.  You can also check the city’s event calendar and catch some local entertainment here on certain evenings. Feed the geese and ducks, sit and read the paper, or have a run if that’s your thing. This park beautiful, safe, and is a hit among the locals.

Have a full day to spend here? Check out Omaha’s Henry Doorly Zoo and Aquarium! Admission is 20 dollars for adults and 14 dollars for kids aged 3-11, 2 years and under are free. This zoo has a wide variety of animals which aren’t in cages but large open spaces with plenty of shade, play areas for kids with a spray park (bring swimsuits on hot days!), and a few touch tanks – the stingrays are great fun for everyone! The Desert Dome is probably the most well-known building at the Henry Doorly Zoo and can be seen from the highway.

Do you know of more to do in Omaha? Been here? Headed here? I would love to hear from you! Leave me a comment below – I always reply! 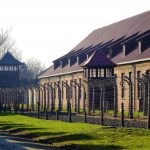 This looks like an amazing place to visit with so much to do and see, it looks like you and your niece had a great time so it looks like its family friendly.
It could be my next family vacation, thanks for sharing your experiences

It’s definitely family friendly, although no one really thinks of going to Omaha for a family vacation lol I wouldn’t have probably ever went under any other circumstances. Happy you found it helpful!

Hey Courtney,
I’ve been looking for a good place to tour and ride. I’m glad I ran across your very interesting article here and have found a little of what I’ve been looking for.
My brother and some of my school mates live there in Omaha. I’ve never thought of Omaha as an interesting place, to say the least, so I’ve never went out and visited them. But I’ve been invited again, and after reading this post I think I’ll definitely go during the next a few weeks.
Thanks for sharing!

Hey, Maun! Happy to have been able to help! At least now you have a few ideas of what you and your brother and friends can all do if ya get bored! Happy Travels!

Wow. Great article!
It was so fascinating reading about your adventure in Omaha, Nebraska.
I have always wanted to go to Nebraska so I will definitely try some of the activities that you mentioned once I get the chance.

You’ve always wanted to go to Nebraska!? You, sir, are the first that have told me this! Haha, there are some great things going on in Omaha, hope you enjoy when you get there!